Levodopa is one of the main medications used to treat symptoms of Parkinson’s. As Parkinson’s progresses the doses of levodopa needed to maintain control over symptoms increases.

Dyskinesia is a complication of long-term levodopa use in people who have had Parkinson’s for several years. It is a debilitating side effect that can significantly impact on quality of life.

It can involve muscle movements across various parts of the body that people with Parkinson’s can’t control, such as twitches, jerks, twisting or fidgeting movements.

One way to manage this is to change the dose and/or timing of levodopa so you get enough in each dose to control your symptoms but not too much that it causes dyskinesia.

How the LID-Monitor helps

LID-Monitor requires people wearing up to six matchbox-type sensors on arms, legs, head and torso in the comfort of their own home over 24 hours. 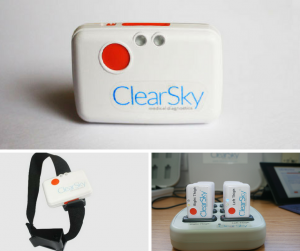 Once the data measurements are complete, data on the devices is uploaded either using a smart phone or through a computer dock.

Data is then analysed using evolutionary algorithms to show the extent of any dyskinesia over 24 hours in a simple to read time chart.

Instead of trying to get a story from the patient about their dyskinesia that is happening at different times of the day, this technology means we can record this phenomenon.

And, by interpreting the data we can therefore adjust the medication and improve quality of life.

Ten years ago, John instinctively knew he had Parkinson’s even before he was diagnosed as his mother learnt she had the progressive neurological condition at the same age and John realised he was experiencing similar symptoms – lack of mobility, shaking hand, lack of dexterity and loss of sense of smell.

John now 70-years-old, who lives with his wife Shirley in Yorkshire, describes living with Parkinson’s today as a bit like ‘Russian roulette’ in that he never knows what each day will bring. Some days he struggles badly with his dexterity, other days his symptoms are less severe but walking could be difficult.

“Sometimes, despite having reminder alarms on my mobile phone, unless I take them straight away I can forget to take my medication when I am supposed to – although I am lucky that I have my wife Shirley to help. If I don’t take my medication at the right time, I can feel sluggish, have leg cramps and aches and generally become extremely slow.”

“Another problem with having Parkinson’s, is that my memory is not as good as it used to be, especially when I need to give information to doctors about any issues with medication, I am likely to say things that I think they need to hear rather than accurate information.”

“Having cardiomyopathy I am used to wearing heart monitors, and I find the LID-Monitor is less obtrusive and I don’t even realise I am wearing it. With the LID-Monitor, doctors don’t have to rely on the information I feed them but [they] get the [objective] data they receive about my condition that can help such things as the timing of taking medication. It gives hope to people like myself and should lead to better standards of life as our Parkinson’s progresses.”